When Plans (Vans) Break Down 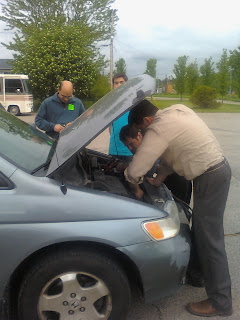 We have reached the end of another ‘school’ year and the highlight of the spring (other than sunshine) is homeschool conferences!

I ususally don’t have the opportunity to hear very much of the speaker but this year I got to two workshops.  Very exciting!  What I do get – every conference – is tremendous blessing from the fellowship I have with other homeschooling families.  What a joy and priviledge it is to join together to lift one another up.

The first conference of our season is held in New Brunswick.  This is about three and half hours from our home.  Not a bad drive at all.  This year, our younger four children were coming with us to spend Friday night and Saturday with friends in the next town.  We were to join them on Saturday evening and then after church on Sunday, we would all head home.

“Hmmm….” Jeff says.  “The van doesn’t feel right.”  We were just about a kilometer down the road.  Another kilometer and he pulls over to the side of the road.  “I’ll turn it off and restart it.”  he decides.  The turning off part went really well.  So well, in fact, that our trusty (rusty) chariot did not turn back on.  Uh oh.

I call this a “When the fat hits the fire” moment.  There are two ways to respond to these situations.  One is explode/melt down.  The other is trust.

As Jeff got out of the car to head back to the church for help, I started to pray.  If ever there was evidence of God being in the details, it is in what happened next.

Before Jeff could get to the church, one of the men “just happened” to be driving up behind us.  Within five minutes, the two of us were safely ensconced in the care of those who were still at the church.

It “just happened” that the alternator was still usable enough that we could get a boost and move the van from the highway back to the church parking lot.

It “just happened” that the organizers of the conference were having a BBQ and fed us supper while we figured out what to do next.

It “just happened” that one of the families who was still there for the BBQ was driving right by where our children were and was able to take us to them.

It “just happened” that the friends who had our children had been asking us to stay longer.

It “just happened” that the amazing friendship between our older daughters expanded to include our son and younger daughters.

It “just happened” that these husbands who have known each other since childhood established a deep Christian friendship that will last a lifetime.

It “just happened” that the wives got along famously.

It “just happened” that on Sunday morning we were able to be in fellowship with other believers – many of whom we knew.

It “just happened” that with 16 of us in the house and only one bathroom, we still made it on time!

It “just happened” that we were able to purchase the part in a nearby town first thing Monday morning.

It “just happened” that there was a thrift store only minutes away – that was a lot of fun!

It “just happened” that there was a mechanic available to repair our van as soon as we drove it into the lot on Monday at noon and by the time lunch was over (and we’d visited another thrift store) we were safely on our way home!

That is an awful lot of “just happened”s.  What I can see, looking back on the weekend, is how God had His hand on every minute detail.

Luke 12:7
Indeed, the very hairs of your head are all numbered. Don’t be afraid; you are worth more than many sparrows.

Psalm 139:5
You hem me in–behind and before; you have laid your hand upon me.

I can always trust that no matter whether my plans or van break down, God has me in the palm of His hand.  I just need to rest there.

One Reply to “When Plans (Vans) Break Down”