The Yawn That Swallowed My Whole Family 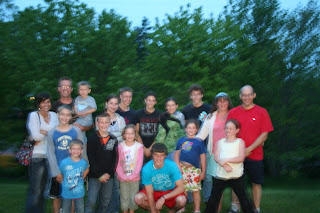 Our big Nova Scotia homeschool convention is over!  It was a success.  Our speaker was great, our vendors were fabulous and our volunteers amazing.  The youth entrepreneurs outdid themselves, families were encouraged and lots of new friends were made.

All of that sounds wonderful doesn’t it?  Saturday night (it was night by the time I got home) I collapsed into my bed too tired to even yawn.  By Sunday, the yawns were so big it was embarrassing.

As I looked around at my family, I noticed that I was not the only one yawning.  All of us were dragging/sagging/flagging.  Even the littlest of the children were eager to fall into bed at bedtime.

As I thought about this a smile came to my face.  Sound strange?  Read on…

Many years ago, I had a burden to be involved in homeschool support.  We had done our first couple of years somewhat on our own and I believed the Lord was encouraging me to reach out to other new homeschoolers and walk with them as they got started.  Jeff was not always on board with the whole thing.  He saw me reaching out when he was seeing all of the areas where I needed to grow at home.  I had health issues and we had young children.  It was difficult for him to see me stretched when I was already struggling.

After a couple of years, I became discouraged and told my husband I would step back.  I think his sigh of relief could be heard across town.

Guess what happened when I was willing to follow my husband’s leading.  The Lord convicted him to get involved in homeschool leadership and support!  God is so good!  He was not taking this ministry away from me, He was making sure my focus was in the right place.

As my husband got on board, all of the outreach and ministry got easier.  As our children got older, they got on board too.  Now I can’t honestly say that they are thrilled with every “opportunity” but they come out and are involved and have made some wonderful friends.  In many ways, their ministry is simply in obedience to their parents and involvement in homeschool activities.

Our speaker this weekend, Todd Wilson of Familyman Ministries, has eight children.  The oldest three were the same ages as our oldest three.  At the end of the weekend, the six were talking and I overheard this,

“We had a lot of fun this weekend.  Usually there are lots of little kids but it was great to have homeschool kids our own age.  It made it one of the most fun conventions we’ve done.”

This family had come to minister to us and just by being there, we were able to minister to them.  The contribution did not have to be big or flashy, they just needed to be involved.

When our children were very young, we had them in summer soccer.  This is a super activity and they all enjoyed it.  The problem was, with four young children and a baby, I was constantly running the roads trying to get everyone to where they needed to be.  We spent the whole summer frazzled and apart.  After that, we committed to doing things that everyone could be a part of together.  When little ones go to camp, we all go.  Older ones are able to volunteer or just help out and hang out with friends.  When AWANA came up, it was the same.  The younger four children participated and the eldest volunteered along with mum and dad.  As they earned their Timothy Awards, they became volunteers as well.

We’ve committed to being together as a family in our day to day.  The children don’t always agree at the time, but as we look back at the time we’ve shared and even on the hard work, we are so thankful that we’ve been together.

Two are better than one, because they have a good reward for their toil. For if they fall, one will lift up his fellow. But woe to him who is alone when he falls and has not another to lift him up! Again, if two lie together, they keep warm, but how can one keep warm alone? And though a man might prevail against one who is alone, two will withstand him—a threefold cord is not quickly broken.

From whom the whole body, joined and held together by every joint with which it is equipped, when each part is working properly, makes the body grow so that it builds itself up in love.

One Reply to “The Yawn That Swallowed My Whole Family”