See you on the pool deck… 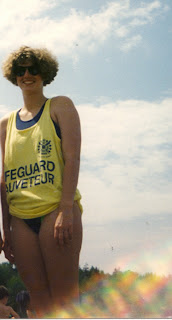 You have all seen them…the skinny teenagers in the pinnies and flip flops, sporting the latest and greatest in eardrum piercing whistles.  Fit, energetic and completely comfortable in their Speedos.

Yes, I am talking about lifeguards.

Growing up, this is what I did as a part time job.  I was one of those teens who could swim for hours (I even wore a bikini – no fear of that now!).  Lifeguarding was a great job.  I was healthy, basically set my own hours, never worked shift work, knew everyone I worked with and got to spend my time making a difference in people’s lives.  You only need to have your child pulled out once to realize how much you appreciate your lifeguard.

This year, my husband asked me to go back to the pool and pick up some hours to help manage some bills.  It was not my first choice but I know that I am his helpmeet and that it is something I can do to ease his burden.  Off I go…

So, just in case you are not there yet, a 40 year old body does not work the same way as a 16 year old body!  Ugh.  If ever there was a recipe for humility this is it.

Nevertheless, I donned my suit (cut somewhat differently than the Speedos of old) and ventured off to the pool.  Although I still have all of the head knowledge, I was concerned about some of the physical skills.  My health has not been the best and I just did not know if I was capable of doing what needed to be done.  Still, this is what I was being led to do and so I did it.

In Scripture, Moses, David, Jonah, Deborah & Barak, Esther, Job, Hosea…all had jobs to do.  For various reasons, each one protested, citing their ‘unfitness’ for the role.  Ultimately, each one did as God called them and they as well as those around them were abundantly blessed.  There was some humility involved in the process and not everyone got it right the first time.  BUT each one was obedient.  That is the key.

1 Samuel 15:22
But Samuel replied: “Does the LORD delight in burnt offerings and sacrifices as much as in obeying the voice of the LORD? To obey is better than sacrifice, and to heed is better than the fat of rams.

This week, I had to do the recertification exam for my lifeguard status.  Guess what.  I passed!  See you on the pool deck.

Romans 1:5
Through him and for his name’s sake, we received grace and apostleship to call people from among all the Gentiles to the obedience that comes from faith.

One Reply to “See you on the pool deck…”