Responding Instead of Reacting

8 August, 2011Under His Wings - devotional blog 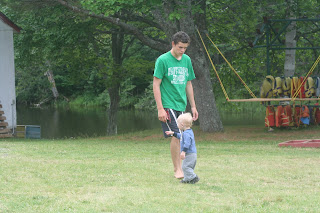 Looking into the angry eyes of my child I wonder where I went wrong.

“Children are a pain!”  “I’m not having any kids.”  “Working maintenance would be better than having to be a counselor!”

What happened to make this child so negatively inclined toward children?

The early teen years can be a challenge as children struggle for independence and parents struggle to let go.  If a parent and child set has a knack for pushing each other’s buttons then the fireworks can be a sight to behold.

Angry words, disappointments and overwhelming frustration can become the best descriptions of not only your day but also your relationships.

This week at camp, I overheard my child out in the basketball court.  As I peeked out the window, I saw that he was playing with the director’s one year old son.  With amazing patience he was following this little one around seeing to his needs and engaging him.  All of a sudden the little guy toppled over.  My “angry – anti-children” son was there with lightening speed.  He scooped the toddler into his arms and asked if he was ok.  As the the child began to cry he muttered, “I guess not.” and snuggled him to his chest until he settled.

My eyes welled with emotion as I rejoiced in the tenderness I had feared lost.

The character of my son was still intact.  Facing the stress of growing up, he was “trying on” attitudes and behaviours as he determined who he was going to be.

Others adults regularly told me what an interesting and helpful young man he was.  Other people were able to see all of the ways he was excelling.

In talking it over with a friend, we wondered if I didn’t get some of this attitude because I was safe.  He knew that no matter what I would love him – and I do.

I have seen that he is still the tender and compassionate boy who would come to tuck me into bed during the years of difficult pregnancies.  He is still the same helper who mows lawns and shovels driveways without prompting or complaint.

Overcoming the muck and mire helped me to see my son not in a new light but in the light of God’s love for both of us.

Proverbs 15:18
A hot-tempered man stirs up dissension, but a patient man calms a quarrel.

2 Timothy 4:2
Preach the Word; be prepared in season and out of season; correct, rebuke and encourage—with great patience and careful instruction.