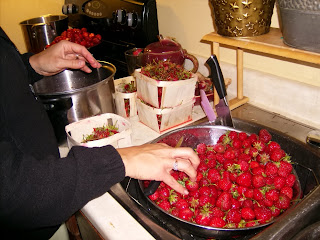 It is one of the yummiest times of year – fresh fruit season.  Now I could also say that about homemade bread season in the fall and Christmas season in the winter and bbq season in the spring.  But there is something special about savouring the mouth watering, juice dripping, sweet and stickly berries that come straight from the garden or the field.
Most years we get five or six flats and I make up all of my jam and pie filling and freeze hundreds more for smoothies and varies desserts.  I even freeze whole berries to use as ice cubes.  Usually, this process takes me two to three days and my fingers are stained red for another two weeks.
This year, something different happened.  This year, we had made plans to go to the beach with friends.  The weather interfered with our plans and instead, our friends came and spent the afternoon in our home.  I asked my girlfriend if she would mind if I worked on the berries while we visited.  Do you know what happened?  She got up and worked right along with me.  So did our daughters.
We hulled five flats of berries and made two batches of jam in three hours!  With the girls helping me again the next day, we finished five more batches of jam and bagged and froze the remainder of the berries in only three more hours!
All in all, six of us worked on those berries.  if you multiple the six hours by the six people, that is 36 hours worth of work that was done in 1/6 of the time and enjoyed in fellowship!
Thank you to my friend and our daughters.

Working together is not always an easy thing to do.  It is not uncommon to hear of ‘water cooler grumbling’ or of disgruntled volunteers or committees because people just don’t see eye to eye.

Have you ever watched two young children struggle over a toy?  One pulls one way and the other pulls the other way.  Eventually, one falls and the other walks away alone.  Or, if mum or dad intervene, both lose.

Ephesians 4:3
Make every effort to keep the unity of the Spirit through the bond of peace.

Any time that we can work together to ease one another’s burdens, it is a good thing.  It doesn’t have to be hulling strawberries.  A simple phone call for encouragement or a note could be the bond of unity that rescues a tired mum from succumbing to the discouragements of a day.

When God’s people are striving to work together for Him, he will bless their efforts.

2 Chronicles 30:12
Also in Judah the hand of God was on the people to give them unity of mind to carry out what the king and his officials had ordered, following the word of the LORD.

Working together in unity does not mean that you have to agree on everything – although that certainly helps.  Have you noticed though, that when you approach something with an attitude of unity, the solution is much more positive whether or not it was your idea?

For example, if mum and dad have differing ideas on something and both are determined to have their way a stalemate ensues that affects everyone.  On the other hand, if mum and dad disagree on something but share the attitude of mutual goals and love then they will be able to work together to achieve the goals in the unity.

Colossians 3:14
And over all these virtues put on love, which binds them all together in perfect unity.