Living in a Fishbowl

6 February, 2012Under His Wings - devotional blog 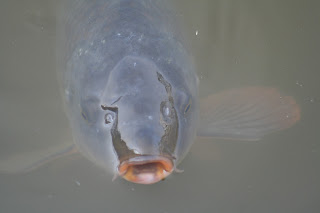 Big, small, orange, colourful, slimy, scaly.  Fish come in all shapes and sizes and people spend hours watching them swim around in circles.  Fish are predictable.  Especially encased in four glass walls.  There are only so many choices a fish can make.

Have you ever seen an aquarium in a public place?  What is the first thing people do when they see an aquarium?  They walk up to it, watch the fish for a few minutes and then…they tap the glass.  What inspires someone to tap the glass?  What are they expecting?  I think that we somehow believe that we will have some sort of impact on the decisions of the fish.  By prodding them, we may trigger them to go up instead of down or right instead of left.  If they are hiding we are hoping that they will come out into the open.

What is it about people that compels us to influence the behaviour of those around us?

Can you think of a time in your life when it seemed as though you were the one behind the glass.  Others were watching every move you made, waiting…

It could be your children watching you or your family, friends, neighbours or even others at church.  Are you doing what they expect of you?  When they tap on your glass do you change your behaviour?

When I was a girl, I had a Beta fish.  Those are the ones with the glorious colours and the delicate tail fins.  The special thing about Betas is that they are so aggressive, they have to be separate from other Betas (or other fish with fan type tails) or they will fight.  They are not very personable fish but they are lovely to watch.  I named my fish Bonaparte.  A strange name for a fish?  Not really.  From the very beginning, young Bonaparte was not satisfied with his bowl and made frequent forays into the world.  You got it…the fish would jump out of the bowl and try to conquer the room.  Just like his name sake, his adventures eventually led to his demise.

When people tap on your glass, how do you respond?  Do you change what you are doing in order to meet their expectations?  Do you become aggressive?  Do you hide?

When God taps on your glass what do you do?

As Christians, there are a multitude of people watching to see how we will respond and what we will do next.  That can lead to a great deal of pressure and can be very stressful.  Knowing before the taps who you are and what you stand for can make a huge difference in your responses.

Someone said to me once that if a person doesn’t stand for something then they stand for nothing.

The next time someone taps your fishbowl, what will you do?

Whatever happens, conduct yourselves in a manner worthy of the gospel of Christ. Then, whether I come and see you or only hear about you in my absence, I will know that you stand firm in one spirit, contending as one man for the faith of the gospel without being frightened in any way by those who oppose you.