Lessons From a Horse 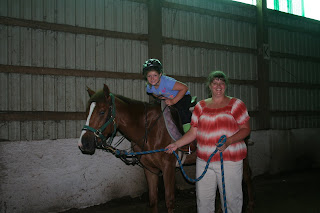 Psalm 32:9
Do not be like the horse or the mule, which have no understanding but must be controlled by bit and bridle or they will not come to you.

Over the last couple of weeks, our children’s riding lessons were a source of insight as well as entertainment.

One day, there was a sick horse in the barn and the staff were all busy trying to help out, leaving us short of leaders for the ring time.  I offered to help out since I was there and was given the privilege of leading a horse for one of my daughters.

There were horses in front of us and horses behind us.  In order for everything to work we all needed to be following the direction of the leader.  Occasionally, we would get too far ahead and need to get back in line by walking in a smaller circle.  It also happened that the horse in front of us was not where he should be and we would need to go around him in order to keep pace with what we should be doing.

Walking alongside Charlie, when he was going in the right direction at the right time and speed, I was able to give him some slack on his lead – taking the pressure off the bit.  Inevitably, however, Charlie would get distracted and I would need to choke up on the lead or even lean into his shoulder to get him to follow me.

Have you ever felt like this with your children?  Have you ever shaken your head in frustration as you thought that your child was going in the right direction only to discover that they were off to the side eating hay? (or some other distraction)

Sawing back and forth on the bit by constantly changing the rules and expectations will cause sores on your children but just as with a horse, if children are trained with consistency and love, they will come to understand what is expected.  There will always be distractions and times when you seem to be walking in small circles, but the goal is to be faithfully going in the right direction and following Him who is your leader.

Deuteronomy 13:4
It is the LORD your God you must follow, and him you must revere. Keep his commands and obey him; serve him and hold fast to him.