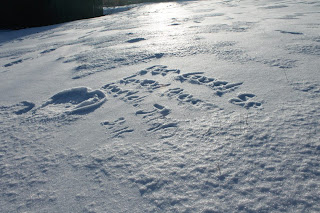 Young love runs to embrace after being apart.
A child holds out their arms to be cuddled by a parent.
Friends hug to express concern, condolence or comfort.
The phrase, “outstretched arms” brings to mind many images. For me, all of them have to do with acceptance, trust and love. When our children were little, they were climbers and jumpers. One of their favourite games was to jump from a height and have us catch them. As they got older, they showed enough discernment to know that it was Daddy’s strong arms they needed. Jeff always had to be on alert to know when the next child was going to come flying through the air in his direction.
One day, we were standing at the bottom of the stairs talking about something, I don’t even remember what, and all of a sudden, one of our children went flying by and landed – hard! The child was four or five at the time and had come around the corner at the top of the stairs and crept down to launch their sneak attack. Because we were distracted, we did not notice the approach but the landing certainly got our attention. Our precious child had taken off from about six steps up and as the tears and howls rent the air, we ached for their pain and wondered how we could have missed them. That child never leapt without warning again. The unmitigated trust that Daddy would ALWAYS catch them was broken.
Over the years, as I have embraced my children, I have often remembered that day when we missed. Now, my children are passed that stage, and I think of God’s outstretched arms waiting to embrace me. Because He is God, He always knows where I am and there is no question as to His willingness to catch me. The question is what I am prepared to do with His outstretched arms? Really, there are only five choices.
1 Thessalonians 4:8
Therefore, he who rejects this instruction [the teachings of Jesus Christ] does not reject man but God who gives you His Holy Spirit.
Revelation 3:15-16
I know your deeds, that you are neither cold nor hot. I wish you were either one or the other! So, because you are lukewarm – neither hot nor cold – I am about to spit you out of my mouth.
The King James version reads ‘spue’ instead of spit. Can you imagine?
Luke 10:27
You must love the Lord your God with all your heart, with all your soul, with all your strength and with all your mind.
2 Kings 18:5-7
He trusted in the Lord God of Israel…For he held fast to the Lord; he did not depart from following Him, but kept His commandments…The Lord was with him; he prospered wherever he went.
John 3:16-18
For God so loved the world that He gave His one and only Son, that whoever believes in Him shall not perish but have eternal life. For God did not send His Son into the world to condemn the world, but to save the world through Him. Whoever believes in Him is not condemned, but whoever does not believe stands condemned already because they have not believed in the Name of God’s one and only Son.
God’s arms remain outstretched. The choice is yours: will you embrace Him?