7 August, 2018Under His Wings - devotional blog

Do you love small talk? Is your happy place in the center of a crowd and in the midst of much conversation? Are you a “get involved in everything” kind of person?

As the leader of a support group, a parent, a conference speaker and a teacher, I spend a lot of time interacting with people. I am often surrounded by people whom I recognize but I don’t really know. I enjoy these people in the safe environment of sharing with them something that I understand. I love to be a part of conversations that probe values, beliefs, visions and goals.

What I am not good at – superficial anything. I am probably the worst person in the world at making small talk. It is a skill I just haven’t mastered. I could run three days of conference sessions and feel totally energized, but sitting and ‘chatting’ about nothing Wipes.Me.Out!

So why do I have so much trouble with small talk and those initial superficial interactions? I believe that it has much to do with fear; not knowing if I’ll be accepted or wondering if the other person really cares what I have to say or is just performing social niceities. Isn’t that an amazing picture of insecurity?

I grew up in a family where even though family members lived only four houses away, we rarely saw each other. When I became a Christian and then married into a Christian family, I thought that it would be like the Brady Bunch and we would all be one big happy family. But relationships don’t always work that way. I think that often times, we (people in general) have difficulty moving into the committed part of relationships because we are afraid of rejection, afraid of judgement, afraid of not measuring up to someone else and it simply becomes easier to reside with a casual connection instead of an intimate commitment.

So Christ Himself gave the apostles, the prophets, the evangelists, the pastors and teachers to equip His people for works of service, so that the body of Christ may be built up until we all reach unity in the faith and in the knowledge of the Son of God and become mature, attaining to the whole measure of the fullness of Christ.

Just as a body, though one, has many parts, but all its many parts form one body, so it is with Christ.

Unity is so much more than just co-existing. Some of unity’s synonyms include coalition and integration and it can be defined as the state of being joined as a whole.

How can we become united? I think we need to begin by investing in one another. Imagine this: you have a family into your home for a meal; later, you and that family both have a family into your homes and then those families and then those families. These are the very first steps; taking the time to move past the small talk and getting to know the people with whom you are connected is the only way to develop relationships where you will become committed to each other. 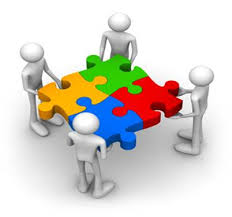 How good and pleasant it is when God’s people live together in unity!