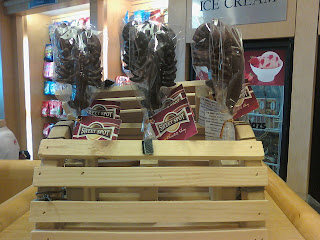 I was at the airport waiting for our son’s plane to arrive.  Wandering around, I strolled through one of the little snack shops.  When I saw this, I could not help myself, I had to take a picture.  The nice clerk was so gracious.  She didn’t even laugh at me…much.  She did come over and ask me why I was taking pictures of the chocolate lobster display in her store.
When I saw those lobsters, I started laughing – a lot. Of all of the things to turn into chocolate.
In Nova Scotia, where I live, the lobster fishery is a huge industry.  It is common place out along the Eastern Shore and down the South Shore to see lobster traps and boats in people’s yards.  In the center of the province, you can expect to see trucks parked along the side of the road selling lobster and a variety of fish at discount prices ($11/lb in the store or $5.50 from the fishermen).  Boiled lobster with a dish of hot butter for dipping is a favourite of many.
So what was so funny about the  chocolate lobsters?
For many, many years, lobsters were all that the ‘poor’ fishermen could afford.  They would haul in their catch and the fruit of the sea would be their family’s provision for the table.
One day, somewhere, someone gave a bite of hot buttered lobster to someone else.  Now lobster is a delicacy that Nova Scotian fishermen ship all over the world.  The airport even sells special coolers for taking the crustaceans on the plane!
The tickle is that until somebody stood up and said, “This is good!”  nobody knew…except the fishermen.
As Christians, we know that our relationship with Jesus is better than anything else in our lives.  Sometimes, since we know we have it, we take it for granted.  Sometimes, maybe we think that the butter (excitement) is not hot enough or that it tastes stale we just are not enjoying it like we should.  But, we still have it and we still know we need it for nourishment, growth and survival.
Chocolate is a favourite the world over.  By commemorating the lobster in chocolate, we are acknowledging how important it is, how much we appreciate it and enjoy it.  I am not suggesting that we make chocolate idols of the Lord, but I do wonder, who are we telling?
When Jesus was to be conceived, the angel came to Mary and said,
Luke 2:10
But the angel said to them, “Do not be afraid. I bring you good news of great joy that will be for all the people.
When Jesus became a man, He told everyone with whom He came in contact,
Matthew 11:5
The blind receive sight, the lame walk, those who have leprosy are cured, the deaf hear, the dead are raised, and the good news is preached to the poor.
As He was completing His time on this earth, He implored the disciples,
Mark 1:15
“The time has come,” he said. “The kingdom of God is near. Repent and believe the good news!”
Mark 16:15
He said to them, “Go into all the world and preach the good news to all creation.
Jesus wanted the people to know that He knew of something wonderful and that they could enjoy it too.  Jesus spread the Word of God and He has commanded that we do the same thing.  What could nourish us better than the love of Jesus Christ, our Lord?
1 Corinthians 11:23-26
For I received from the Lord what I also passed on to you: The Lord Jesus, on the night he was betrayed, took bread,  and when he had given thanks, he broke it and said, “This is my body, which is for you; do this in remembrance of me.”  In the same way, after supper he took the cup, saying, “This cup is the new covenant in my blood; do this, whenever you drink it, in remembrance of me.”  For whenever you eat this bread and drink this cup, you proclaim the Lord’s death until he comes.
Today, who are you going to tell about how good it is to know Jesus?
Psalm 34:8
Taste and see that the LORD is good; blessed is the man who takes refuge in him.