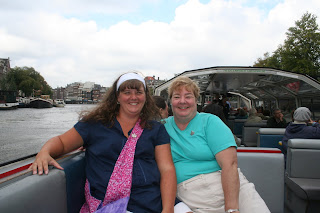 A few years ago, my mum took my brother and I on a whirlwind trip of Western Europe.  We went to Scotland, Holland, Belguim, France and England.  It was the trip of a lifetime and we enjoyed discovering many new cultures.

When my grandfather was in WWII, he served in Holland and his Regiment was part of the liberation of that country.  Visiting Anne Frank House and traveling along the canals were precious insights into my grandfather’s life.

While we were overseas, my mum felt that it was important for us to identify ourselves as Canadians – especially in Holland.  She had for each of us a pewter brooch to wear.

I am very thankful to be a Canadian and to enjoy the vast freedom and privileges of this great land so wearing a maple leaf was an easy thing to do.  Many people commented on our “Canadian-ness” and some even reminisced over Canada’s role in WWII.  Visiting the resistance museum was definitely a source of heart warming as recollections of Canadian service and sacrifice were identified.

All of this to say that I was proud to be identified by the maple leaf – the symbol of Canada.

One evening, we out doing some ‘touristy’ shopping in one of the squares (Amsterdam is laid out with a street running along the canal and then squares behind with more housing and shops).  We went into a tourist trap and the merchant approached us.  He congenially wrapped his arms around my mother and hugged her (I think there was probably some flirting going on).  “Ahhh, you are from Canada.  How wonderful!” he gushed.  My little brother has a Canadian flag tattooed on the back of his neck and the merchant thought this was ever so clever.  When he turned his attention to me, he smiled and quipped, “They are from Canada, but you, you are from Cannabis!”

The man was pointing at my maple leaf and grinning.  Now to appreciate this, you have to understand that the drug culture in Amsterdam is very liberal.  No one even bats an eye at marijuana use.

So how did he decide that I was from Cannabis?  My maple leaf looked as though it was blowing in the wind a bit.

I suppose that it would be possible to make the mistake but I was mortified!  I can tell you that when we left that store I removed the offending leaf and left it in my suitcase for the remainder of the trip.

In Canada, it is unlikely that anyone would have made that mistake.  We are all so proud of our Canadian heritage and because of our culture, it would not be the norm for someone to assume that I would cheerfully sport a cannabis leaf on my lapel.

Because of where we were, something I was doing led to questions about what I stood for.  Even though I knew what I was doing, there were others who simply did not understand and my actions set an example that I did not intend nor support.

Romans 14:20
Do not destroy the work of God for the sake of food (or a lapel pin). All food (maple leaf lapel pin) is clean, but it is wrong for a man to eat (wear)  anything that causes someone else to stumble.

1 Corinthians 10:32
Do not cause anyone to stumble

Even though it was not my intention, what I did reflected something that was definitely no the message I wanted to send.   There will always be someone who doesn’t understand what or why we do what we do.  It is up to us to make every effort to live in such a way that all that we say and do brings glory to God.

7 But not everyone knows this. Some people are still so accustomed to idols that when they eat such food they think of it as having been sacrificed to an idol, and since their conscience is weak, it is defiled. 8 But food does not bring us near to God; we are no worse if we do not eat, and no better if we do.