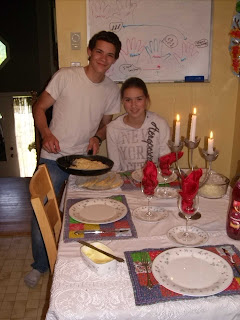 Two teens, one kitchen, a handful of ingredients and we had a gourmet supper.  The table was laid with white linen, silver and china.  Crystal glasses waited poised to receive sparkling pomegranate juice.  Candlelight danced through the room and the savoury aroma of garlic permeated the air.

The children suggested that they would enjoy having aglio e olio for supper.  They had learned how to make it with my mom and it had been a while since they had enjoyed the succulent shrimp tossed in angel hair pasta with fresh garlic and roasted peppers.  Is your mouth watering?  Mine was.  The problem was that I was exhausted.  Too tired to even imagine preparing something like that.  I was thinking maybe some eggs and toast or even a can of soup.

They insisted that they could take care of it.  I offered up a movie with dinner as treat and then put my head down for a nap.

When I got up, they had everything prepared.  The ambiance was delightful.  They set the atmosphere with their attitudes and it carried over into everything they did.

I had expected a nice meal.  What I received instead was a feast.  Better than any movie was the interaction we shared and the laughter and closeness were even more delicious than the meal.

In my tiredness, I anticipated only that of which I felt capable.

How often do we do that with God?  Because, in our own power, we can only do so much, we fail to remember that God is able to do all things.

Ephesians 3:20
Now to Him who is able to do immeasurably more than all we ask or imagine, according to His power that is at work within us, to Him be glory in the church and in Christ Jesus throughout all generations for ever and ever! Amen.

One Reply to “Aglio e Olio”